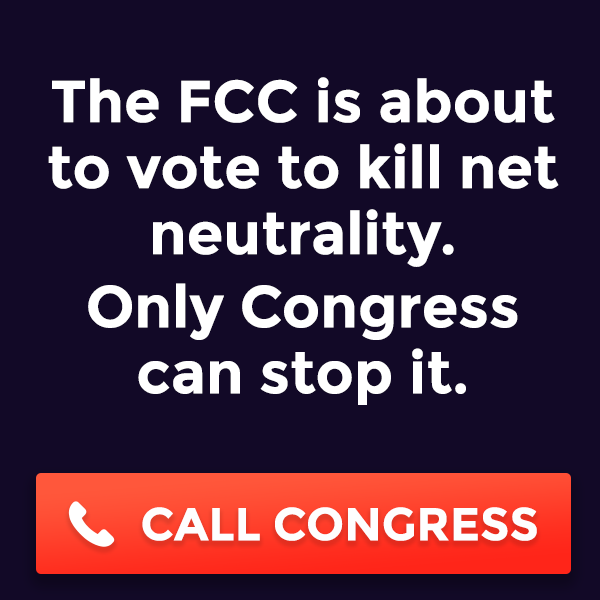 The internet is a pile of garbage. But it’s everyone’s pile. And from garbage, flowers grow.

If you’re an American, do what you can to protest at battleforthenet.com.

It’s not every day you get to look at a chunk of someone from actual folklore. St. Nikolaos of Myra was not, of course, anyone who ever associated himself with the European tradition of winter gift-givers. He probably never heard of them — why should he have? he was not European — and if he had, he would no doubt have considered them pagan monstrosities. That’s only fair; they are, which is why I am so fond of them.

Still, we don’t see a lot of euhemerism these days. When I was younger, Elvis looked like he was going to make it into the pantheon; now, as more of his fans have passed away, he’s lost his gleam. But we’ll always have Santa. Except for about an hour after that difficult conversation when you are seven.

Well, I just found out what I’m reading for the next month. Villanova has an online archive of the Illustrated Police News, a proto-men’s magazine of the Victorian and early Edwardian era. It’s tough to make out, since the pulp copies were never meant to hang on as long as they did, but it’s worth the read.

Here’s an assortment of ads from a March 1895 issue. 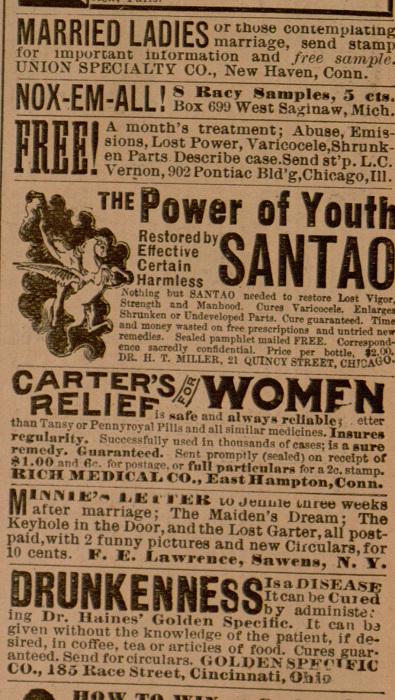 The first ad is the first disguised ad for birth control. What the buyer might receive here — a pessary, a diaphragm, an unhelpful pamphlet — depended entirely on how strongly local Comstock laws were enforced.

The second ad, for Nox-Em-All, struck me as an ad for smut, since it promised “racy samples.” However, looking into it, I see that Nox-Em-All is a kind of card trick. Card tricks can be very old, and the word “racy” did once have a broader sense of “vivid and exciting.” Stranger still, Noxemall (sic) was once a brand of animal feed out of Detroit. And a line of shoes. It’s hard to say. Nonetheless, my guess is still smut.

The next two ads are for quack medicines for “lost power”—which is to say, boners. Offers to “enlarge shrunken or undeveloped parts” were popular then as now. The treatments, whatever they were, could have done nothing for a painful varicocele.

The next ad is, depending on the customer’s timing, either for birth control or for abortion. A pre-20th century ad for a “menstrual regulator” or an “emmenagogue” generally means just that—induction of miscarriage. To “restore their courses,” women resorted to tansy and pennyroyal tinctures; the ad tips its hand by mentioning that. They might work, or they might not, but they would certainly bring on violent illness, and possibly death. How much better Carter’s Relief was, I cannot say.

What follows is, by period standards, a hilariously obvious ad for smut. “The Keyhole in the Door” may or may not have referred to a version of this bawdy song.

The idea of a cure for alcoholism that could be secretly slipped into food is heartbreaking. The name of Dr. Haines’ Golden Specific was no doubt meant to play on the famous gold cure for alcoholism, taken by the well-off at sanitariums. This substance, however, was neither gold nor specific. It could be slipped into food or drink without drawing notice because it did nothing.

Chivalry, as a social system, has fewer genuine advantages for women than equality does, but one that it does offer is the occasional free murder. 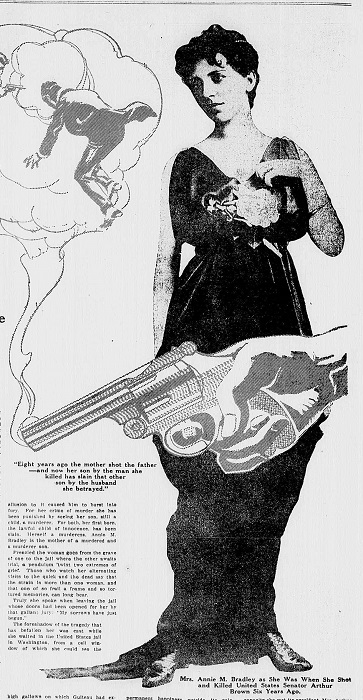 In 1906, Mrs. Annie Bradley shot Senator Arthur Brown of Utah, who had indeed treated her quite badly, and even put it in writing. This perhaps influenced the jury to return a verdict of “not guilty.” The above melodramatic illustration, together with the accompanying article, blames her for the 1915 murder of one of her sons by another. But Mrs. Bradley, however unhappy, did not die as a tragedy queen; she opened an antique shop and died in 1950, far from the heavy fumes of the Edwardian era.

I was in the nowhere-place today, thinking nothing, which is to say that I was in the subway waiting, when I noticed this pair of ghost signs. 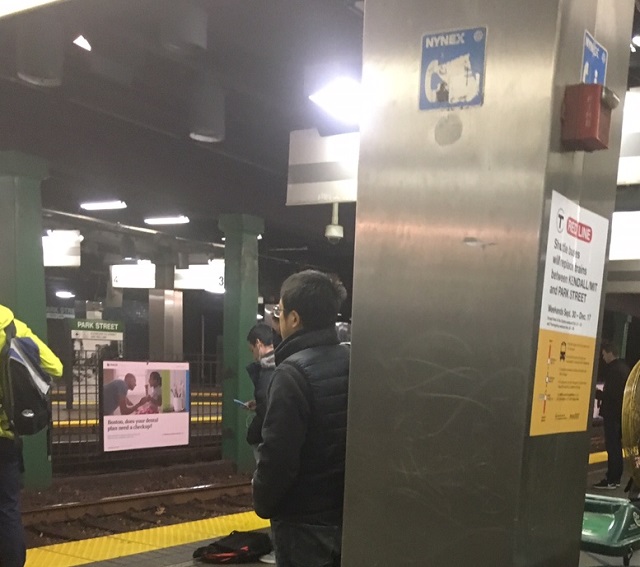 NYNEX was the Baby Bell that serviced New York and New England until about 1997, when it merged with Bell Atlantic. Its vast and quivering descendant is Verizon. These two signs were probably directly over a pay phone mounted on this column.

When I was a girl in boarding school, desperately lonely after leaving home or being left by friends, I crawled to a NYNEX phone: maybe in the alcove by the old baggage claim at Logan Airport, maybe in the basement of my dorm room where no one could hear.

It is certainly not that I miss NYNEX; no one, I can confidently state, misses NYNEX very much. But the sight of signs that are at least twenty years old reminds me of a day when there were greater distances between places, and yet, somehow, more meeting, more hearing.

Sometimes the optimism of the past is unbearable. From the Boston American, October 1915: 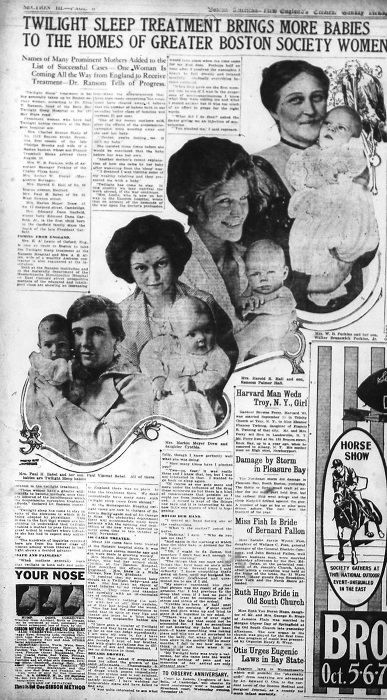 Twilight sleep was, when it was devised, heralded by prominent women as a genuine miracle of medicine. The “Freiburg miracle,” however, required the careful individual attention of a doctor throughout a woman’s labor, which is to say that it required a woman with a lot of money to travel to a specialist’s clinic. Efforts to produce twilight sleep on a mass scale in American hospitals led to hallucinatory, painful, brutal experiences. One of its proponents, Mrs. Francis Carmody, actually died under it. But here in 1915, twilight sleep was still believed to be a gift to women.

Although twilight sleep could depress the breathing of infants, potentially endangering them, the two babies named in the article must have recovered from any troubles they had. Both of them led long lives. Trumbull Blake died in Florida in 1986. Edmund Dana Garfield, Jr., died in 2003, and was fondly remembered as an aviator and a loyal Texan.

A handsome little town. Generally I scratch around places for a terrible hidden history, but there’s not one apparent here. This, for once, I can appreciate. I like a place that has a sign erected to the fact that a horse was once owned there. 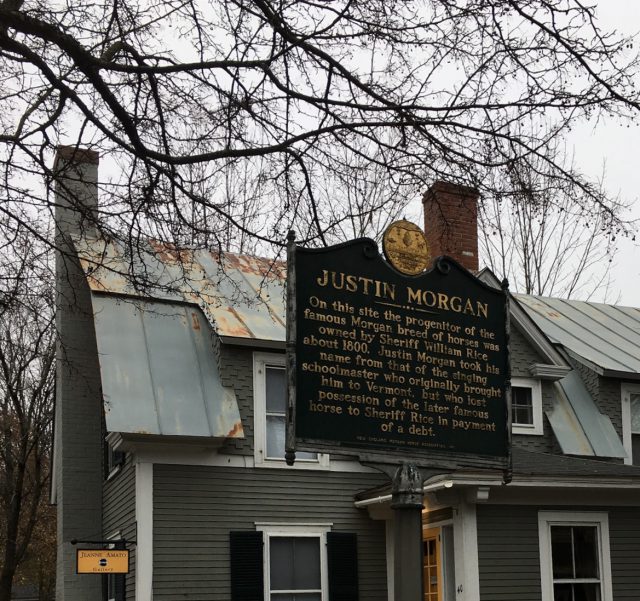 Stalled by a power outage today, but still excited to talk to you about a major archaeological discovery in the field of tartans. 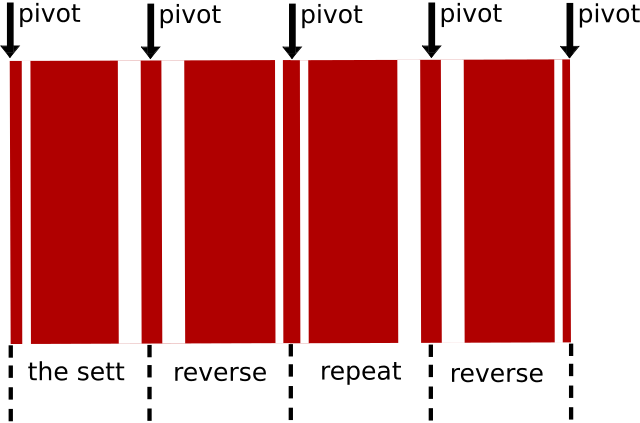 Diagram of a tartan pattern, by Celtus (own work) [CC BY-SA 3.0], via Wikimedia Commons

Actually, it isn’t. What I want to talk about is the stunning art on a seal excavated from the grave of the “Griffin Warrior,” a Greek nobleman buried in approximately 1450 BCE. This seal is so exquisitely detailed, with such unprecedented attention to anatomy and perspective, that if the dig had not been under supervision from the first, I would not have believed it was real. We associate the contemporary Minoans and Myceneans with a sharper, starker art, evocative but not realistic. Although this seal is of course not as technically accurate as, say, the Elgin Marbles, it has a level of observation that I would not have thought possible at the time.

Note the prone warrior, the one on the left who has fallen; note the warrior on the right. They have something in common: their skirts. They are both wearing tartan-weave cloth with a tasseled edge.

Whatever the ordinary person may think of the ancient Greeks, it probably does not include kilts. Popular culture associates the tartan with the Scots, with stuffiness and the Highlands, but the tartan is a truly ancient pattern. Tartans were found on mummified bodies buried in Urumqi, China, dating from 1400 to 1000 BCE. Elizabeth Wayland Barber has examined these tartans, and weaving in general, as a fugitive trace of ancient life, of women’s work vanished forever. This seal shows a very manly scene, but the artist, however unconsciously, recorded the handiwork of women.

Not feeling it today.

Enjoy the vastness of the flat: the ocean and the sand.

I have calmed myself down with Jeff’s peaceable timelapses for several days. As the internet naturally finds a way to spoil everything, some viewers have seized on this video as proof of a flat earth. This is, of course, a lack of comprehension of the size of all things. We should all be made to feel enormously small in our lives, at least once.

News today: there is potentially an enormous sealed chamber in the Great Pyramid at Giza, perhaps as large as the King’s Chamber. 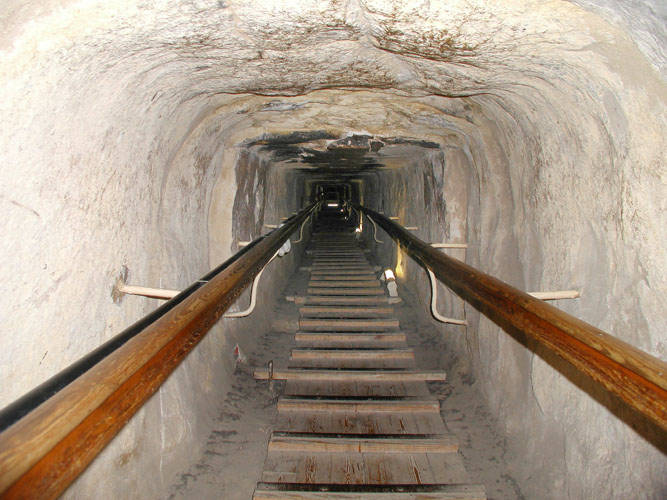 Ascending within the Great Pyramid (photo by Jon Bosworth)

This has captured me in a way that the pyramids have never done before. I never connected to the pyramids — there was no mystery left about them. It was all hollowed out and stolen millennia ago. The chambers stood as empty as lava caves. I never was drawn to the theories of “pyramidiots,” either, even in fun. The grand strangeness of ancient Egyptian religion is strong enough without the involvement of aliens, or Biblical figures, or any other latter-day figment that robs the world of wonder. But the pyramids themselves, as archaeological sites, have been left open, and stand cold and alone. Now, there is something new: possibility.

In all likelihood, the void or voids were simply intended to relieve the pressure on the chambers below, not to keep a golden hoard or imprison master architects. Nonetheless, the Egyptians made many plans to stay one step ahead of tomb robbers, not so much by curses but by paintings, spells and figures that rendered a magical, eternal source of goods and protection for the souls of the dead. Perhaps something within remains.